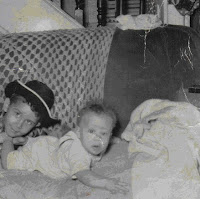 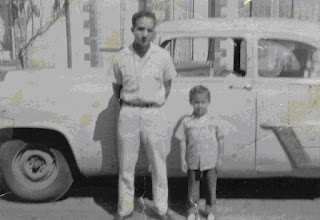 (Rue de Tillieres 1959)
I was born in Columbus Ohio in 1954 to Edith G. Bowers and Leonard W. Bowers. I was named after my father so that makes me Jr! My father was in the Air Force when I was born and stationed somewhere near St. Louis Missouri because we live there around some of his brothers (my uncles) and their families from shortly after I was born until about 1958 when my baby brother Timmy was born. I can remember events as far back as my second year of life and have very vivid memories of my third year on this planet. Although I love my parents very dearly I must say that I wasn’t fortunate enough as to hail from a family that was vise free partially because my parents married young and still had a degree of party spirit going on! I heard words in slang and profanity from my father's friends that could make a sailor cringe and I was employing them in conversation as early as my third year of life. Don’t get me wrong, I’m not doing the victim thing here I’m just saying that when you’re in certain circles things of the nature of your placement are bound to happen sooner or later and the choices we make are sometimes affected by the stimuli we encounter in our early development as children. Some good, some not so good, but you got what you got and you did what you did

My brother was born in August of 1957  in and named (Timothy Leon Bowers). Well now things begin to spin! My dad was then transferred to Brezolles’ and based at Druex Air Base in . My mom, brother and I moved there shortly afterward. The small ’ was nothing like back in the States and people there never used vile language instead it was quite the contrary. Everyone as I can recall showed immense love and exemplary common courtesies not so common in our society even back in the 1950’s. 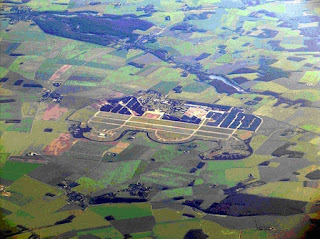 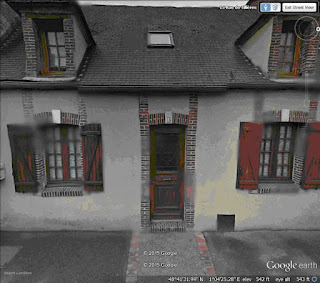 We lived at 15 Rue de Tillieres pictured above. This is the actual physical location of where I lived from 1958 to 1963.  I was placed in base schooling, but I didn’t get along well with the other American kids because I could out cuss them without even trying. My mom came up with the bright idea that I may do well in so that’s exactly what happened. I learned the language really fast and I had a lot of help from the Madam Lebudec and family because that’s who I was with five days a week being that my mom was working on the base in the Affex. So in essence I became a little French boy and since no one understood my vulgarities in my native tongue I soon lost interest in using fowl language and began the more eloquent approach to interacting in my new social environment. I must say the French were excellent teachers and for them that was just part of a basic service to mankind in general.

American GI’s from the base would sometimes find their way to the village and scare people with their drunken behaviors and womanizing predatory type actions. It’s safe to assume that the political minded French wanted them gone despite the economy and dollar exchange of the day. They tolerated and endured this sort of behavior largely due to the liberation by American troops during the Second World War.

I started in French schools at the age of four in 1958. By the time I was seven years old in 1961 I had the equivalent of an American 7th grade education. School hours were different there, and there was no summer vacation instead we had occasional breaks so we never got to far off track and had very little time for mischief. There wasn’t a lot of jealousy over belongings or clothing because everybody whore the same thing. We wore grey or light blue smock type uniforms. The girls wore skirts and the boys wore shorts. Can you imagine wearing shorts in mid winter? 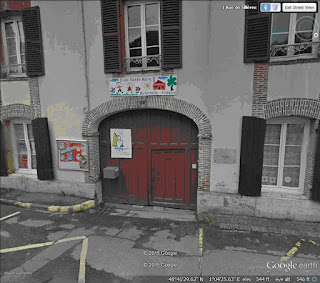 This is the physical location of entrance to the courtyard of the Catholic school I was placed in shortly after my arrival in 1954. I would attend French public school from 1959 to 1963. It was here in the Christmas of 1958 I would meet a Santa so unique in character the memory would last a lifetime.

Christmas was a really special time of year in France, Santa Clause there is called “Father Christmas” or “Pare Noel” in the French language. Madam had two daughters; Soline the eldest, and Annie Claude who was a year older than me and was also my best friend. Much like Forrest, Forrest Gump we were like peas and carrots. I had pictures of Annie Claude and Soline that were sent back with me by Madam, however after my Mother's departure from this plain of existence my sisters laid claim to all memorabilia and it would do me very little good to ask for cooperation at this phase of life. The picture as to why my lack of relationship with my sisters exists I think may be painted at some point in this story.  There is so much about my time in to reflect on in memories, and in the overall view it was all good to me.