We finally moved to our own house at in the spring of 1965. 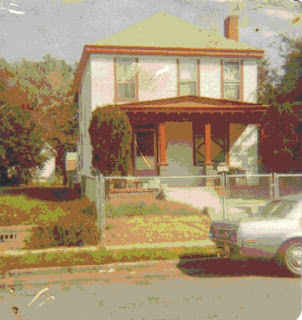 My brother, little sisters and I were thrilled that at last we had our own back yard. There was even an apple tree in the back yard that the previous owner had mended different apple branches onto so the tree had 4 kinds of apples on it. I had a dog my uncle Howard brought up from the previous winter that I named “Blacky”! He was a Blue Tick, I think that’s how you spell it. But anyway he was a good dog and followed me everywhere I went. He was very smart and to me he was like a close friend that understood me somehow even if he was a dog, he seemed to empathize with my emotional state where people could not or did not whichever the case may have been. 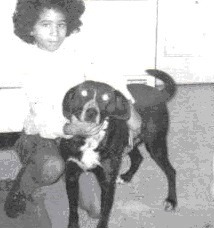 One morning that spring me and my little brother Timmy were out playing in the front yard in our little furry coats my mom had gotten us and along comes this guy I had never seen in the neighborhood before. He was looking real mean as if he were going to say something crazy! He walks up to me and asked, “What would you do if I hit your little brother”? I responded like a total coward! I said, “I’m not allowed to fight guys bigger than me!” God, I’ve regretted that over and over throughout my life and I still to this day it can make me feel so worthless over that! Anyway, he get’s down on his knees and say’s, “I’m not bigger than you now!” I was at a complete loss, my little brother had just seen me cower in spite of a threat on him! I can’t quite remember how I got out of that one or how it ended except the guy whose name happened to be “Guy Monroe” walked off with a sneer and snicker knowing I would never be a threat to him and that he could pretty much have his way around my neck of the woods..

I was no more than 11 years old at the time, and I eventually ran into Guy again at school in September. We used to play this game with a football out in the field called, “Smear the queer!” The object of the game was to catch the ball from a guy who had made goal without being tackled in the mud! You guessed it, Guy Monroe was that un-tackled kid and everybody at school was trying him out to see how close they could get in the domination game. I was out in the field with the rest of the kids trying to find where I ranked and yelling Guy, Guy, with my hands in the air acting like I wanted to receive a pass that would make me the queer that got smeared or either a triumphant big dog goal maker! (Fat chance)! I was only trying to fit in and to tell the truth I was faking it! I never thought he’d throw me the stupid ball but he did! “Damn!”, “&*@#! I was holding the ball and about to be creamed by 20 or so kids! I’d never gotten the ball before, why now?

I made it a total of about two to three yards before I was piled upon like a solitary meatball in the bottom of a bowl of spaghetti! Ouch! Guy ended up being someone at the school everybody else in the male hormonal department either respected or were scared of. What’s really strange is how he chose to befriend me after all that intimidation and watching me make a complete idiot of myself! He came by the house one day when I was out in the front yard after school and asked, “Do you steal?” I had never stolen a thing in my life, but I was sure going to try to look as tough as I could in Guy’s eyes so I said, “Yeah, do you”? 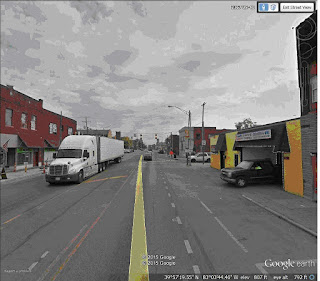 So off to the store we went! I was now officially making my first move toward becoming a common thief! We went to a store on that was called Gray’s Drug Store, they've since built a Family Dollar store on the spot. They had a candy Isle and my new gangster buddy and I took some candy! He must have filled his pockets with 10 or 12 candy bars! I on the other hand “stole” one solitary Milky way bar! I thought that would prove I could be a tough guy too, but instead it appealed to his humorous side because he laughed about it all the way home.

The worst part was when I got home I still had the candy bar and my mom asked me where I got it and where the money came from to buy it? I was no good at lying and my mom saw right through it! She made me take the candy bar back to the store and give it back! What’s so crazy is I actually did it! I went in and told on myself and gave the man behind the counter the candy bar and told him how sorry I was! What the hell? I was now a coward, and a unsuccessful thief and a liar all rolled into one disgusting little package! I really wasn't sorry and the next time I went into the store I did it again, was caught and asked never to come into the store again unless my parents were with me.

It seemed I was no good at anything and just did not fit in no matter how hard I tried. I was no good at football, I always sprained my ankles! I wasn’t very good at even catching the thing! Basketball wasn’t my cup of tea either, I looked good but the stupid ball just would not go into the bucket for me! I wasn’t very good at stealing so it seemed I was destined to play little silly games like building makeshift toy planes or running around in the yard acting like I was flying. I also did the “Fort building” thing I got into with a select group of nerds like me! We even went on to jump ramps with our bicycles until that also ended in injury for me. I was taking saxophone lessons, and sax was O.K. but it wasn’t real interesting to me, besides the horn was almost as big as I was!

My uncle (Dad’s youngest brother) came by one day and had a guitar. He put it in my hand, showed me how to hold the pick, put my fingers on the neck and in the frets to change tone and pitch. I knew then that this was the beginning of an affair that would not likely end any time soon. This first physical encounter with a real guitar came to me in a open E and chorded by barring across the frets. I would shortly learn from my Great-grandmother Carrey Newsom (Mother-Lady) how to produce chords in standard 440 tuning. 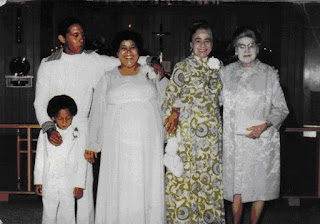 L to R 1st son Junie, Myself, Mom, Gran and Mother Lady
Posted by Unknown at 7:29 AM