When we returned to . From Rantoul we lived temporarily at my Grandparents house at My grandfather was from a farmers type environment in and maintained large gardens on the outskirts of the County as well as the one he had at the residence. He had this work ethic thing instilled in him and he was going to make sure we, as grandchildren applied it to our own perspective logic.

The yard was big, and full of fruit trees, well there were 3 pear, 2 cherry and an apple tree on the property along with the garden. Then too there were all the trucks and tools he used in his trade which happened to be “The Jack of All” according to my dad’s description. My dad was an accountant in the Air Force and maintained that in order for one to be proficient at a vocation one must master it by devoting the majority of ones time to the practice of (1) chosen profession above all other interest. These two conflicting mandates from two of the most admired men in my life painted a picture of rivalry in my mind at the time and would in later years affect the relationships between siblings and parents alike! 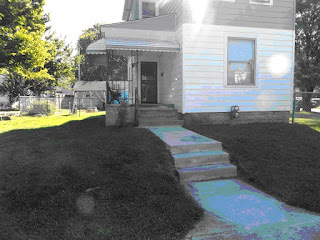 Over the years it seemed to have fostered the individual attitudes amongst family members that, “My perspective view and outlook is more adequate and socially acceptable than yours”, so to speak! In time I would learn what the word “dysfunction” meant and how it would play its part in my life. It took many years to come to terms with the realization and that understanding came at cost! 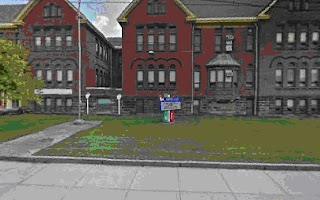 It was time for me to get back into the school system after a long winter absence and summer vacation. I had envisioned that my dad would take me and walk into the classroom to introduce me to the teacher to set some sort of psychological precedent that might make other students admire or respect me! As it turns out that was only a child’s day dream or fantasy! The fact is I walked into a classroom like I had never seen before!

Remember I came from almost (5) years in to live in "back water" Rantoul ! In Rantoul the racial balance was the typical few air force black children and in 1963 Hispanics were very sparse and where mostly Mexican. No need to say there was a  much larger proportion of white children by comparison almost 9:1. The truth of the matter is I was never conditioned to see anything other than what I saw and when I walked into that classroom at  everyone was black accept for the teacher herself, and a wee little tiny withdrawn white girl who had eye problems and was dressed in what seemed to be 1940's type attire!

She was really out of place and so was I! I came to school wearing short pants, a smock top and beetle type boots, but what makes it so much worse was that I had on long checkerboard socks! Needless to say, all the kids got a big laugh off on me, but it really didn’t bother me at the time because I had no idea what the heck they were laughing about other than maybe the way I wore my hair, or more importantly the fact that I was laughing along right with them!

When the laughter was over Mrs. McCarley (the teacher) asked me to find a seat. The only two seats available were about in the middle of the classroom.
No one was laughing anymore, instead they seemed to all look very mean and sinister to me! I had to walk through a narrow corridor of seats occupied by very mean looking kids and felt surrounded in the center of the room. On the way to my seat I was asked by three different boys if I thought I could beat them? Dugh! They were talking about fighting and I just got there! My answer was to the first, second and third a resounding NO! After all, they were to me pretty scary looking characters!

Then, they turned and pointed at this little small skinny black kid named Martin Fields and asked almost in unison, “Think you can beat him”? Well I had already eaten crow to the tune of three bigger scarier looking kids so I felt I had to be able to “beat” somebody! This kid was so small but he had his lips pursed and nose flared open as if to suggest I better say no. Silly me! I said, “Well yeah”!  The next thing I hear is the classroom burst out into a sound that went something like this; Whooooooooooooooo”! What had I done?

Now I was scheduled for a fight with this kid after school and didn’t even understand why, or how! I reasoned that I had watched every Elvis movie made to date and I could take him, after all we really weren’t going to fight it would all just be an act and we’d just go through the motions and put on a good show, at least I would not have to fight a big kid!

School let out and everyone made sure to remind me about my appointment with Martin Fields especially Dennis Walker the main instigator who was supposedly also on my side to hear him tell it! We walked out to the fight tree a half block from the school in front of a big old Baptist church and Martin dropped his books to the ground, lowered his head, poked out his bottom lip and raised his dukes! All of a sudden he didn’t look so small anymore! There had to be about 15 to 20 kids gathered around and more were coming, good God what the heck? This just couldn’t be happening! What’s worse is there was not one single white person anywhere to be seen! I was the whitest spot in the picture, and I wasn’t even white!

Kids were yelling, “fight, fight, fight…” Martins fist were bobbing up and down to the rhythm of the shouts in perfect sync, and I was petrified! I reasoned I’d better do my Elvis routine and salvage what social dignity I might, so I slid out of my jacket and went into my act, I tried to talk my way out of it and that showed no results other than to get me in deeper, so up went the dukes to defend myself from this little skinny kid who thought he was going to best me! Dennis Walker was trying to encourage me by saying “don’t worry about it man, you can beat him”!